The company's certification according to CSN EN ISO 14001:1997 has become a permanent process of continual improvement of all areas and activities. Having introduced EMS measures, secured by the necessary resources, mostly financial, the corporate management has undertaken to meet the set goals and objectives. BRISK's environmental policy constitutes a documented commitment of the corporate management which defines the company's attitude to the environmental management system.


Every year Brisk Tabor a.s. invests a lot of money in environment protection. These investments are always closely connected with the modernisation of production, not only to improve the production process, quality, working conditions of employees, but also to reduce the impact of the company's activities on some of the environment components.

Also in this year, when the company celebrates 70th anniversary of the spark plug production in Tabor, it invests millions in new technologies which contribute to the environment protection. On of the environmental projects is the degreasing of metallic parts, which is supported by the State Environmental Fund. This project is part of the modernisation of the production process. New degreasing plant, MecWASH MIDI 400, in the Mechanics I centre (see photo no. 1) was delivered by Lecom Ledec nad Sazavou. Compared to the old plant, the new plant brings not only process modernisation, improvement in working conditions, better quality, but also significant savings of operating expenses. 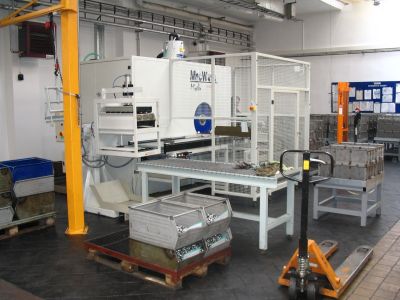 In this year other important environmental projects, which worth mentioning, were or are implemented or are in the phase of planning and preparation in the company. For example, they include a new system of metallic scrap collection, which took place in April this year. Old inappropriate and unsightly containers, which had served as collecting means for metallic scrap from the metal shop, were replaced by new high-cube containers (see photo no. 2 of ABROLL system according to DIN 30722).

The company has reached further significant improvement in the area of waste management by the investment in the removal of old burdens in the company area, and the building of a new waste management system in the departments which are the biggest waste producers. The construction and commissioning of the new waste management system in the metal shop and tool shop in June of this year (see photo no. 3) followed the implementation and commencement of maintenance of unsuitable areas behind the manufacturing halls. These areas were decontaminated and rebuilt in August (see photo no. 4). Also the 1st stage of removal of old burdens started. This work will be completed within the 2nd stage in 2006. The company plans to build new handling areas there.