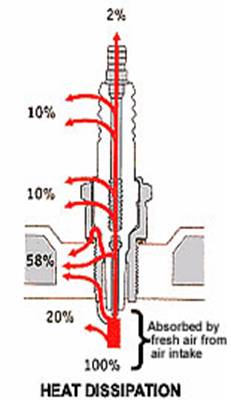 Heat range is the measure of how quickly the spark plug tip dissipates combustion heat. It must do this in precise and controlled manner so the spark plug will:

Why is Heat Range Critical?

Two basic conditions for proper performance of a spark plug are given by sufficient electrical insulation between the center and ground electrodes and heat transfer from the parts of the spark plug projected into the combustion chamber. Both conditions are directly related.

In order to ensure sufficient insulation between center and ground electrodes it is necessary, during operation, to keep the insulator tip (the part of the insulator projecting into the engine area) within an optimum temperature range.

In order to achieve the correct temperature of the insulator tip for a given engine, the spark plugs are produced in various thermal values. The range of thermal values for BRISK spark plugs extend from the warmest to the coldest, namely 19, 18, 17, 15, 14, 12, 10 and 08. 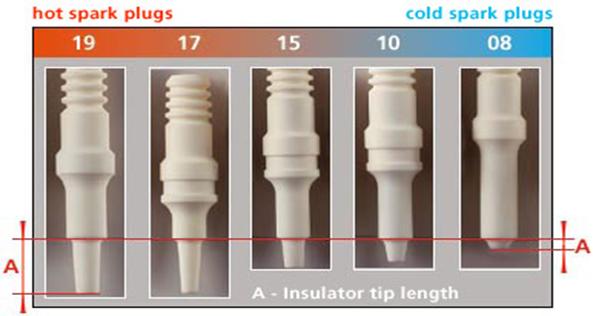 "Hot" spark plugs remove heat from the combustion area relatively slowly. They have a longer insulator tip and they achieve a temperature higher than the deposition zone relatively quickly.

"Cold" spark plugs feature a relatively short insulator tip and they remove heat from the combustion area quite fast, in order to avoid advanced ignitions.

Zone of fouling with non-evaporated fuel - this is the zone of the highest degree of fouling for spark plugs. The mixing ratio of fuel and air is very low in this case (rich mixture). Diffusion (atomization) of fuel is low and the fuel burns in its liquid state. Level of creation of combustion deposits is significant. In addition, the insulator tip is wet from the non-evaporated fuel. The decreasing insulation resistance of the insulator tip results in an occasional failure of ignition. Cold starts and frequent moving off from rest in cold weather will accelerate the fouling of the insulator tip.

Zone of fouling with soft deposits - vehicle engine run at idling speed or its low load can result in the setting of soft (dry) combustion deposits on the insulator tip, even if the fuel does not burn in liquid state.

Determination of thermal value of a spark plug

While the engine is running, the spark plug is being heated to a certain temperature. The highest temperature can be detected at the insulator tip end. Thermal balance between the input and output of heat from the spark plug is determined by the value known as the spark plug heat range. An important parameter of this heat range is given by the so-called self-ignition value. It is measured by a special measuring engine by means of a gradual increase in the supercharging pressure up to the initiation of self-ignitions of the spark plug. The self-ignitions are indicated with the help of the ionization method, than they are processed by the control system with a feedback to the engine control. The thermal load is expressed by the IMEP (Indicated Mean Effective Pressure lb/in 2 ) units.

The equipment test of a particular engine is carried out with the help of special equipment making it possible to detect self-ignitions during an increase in spark advance in comparison with the original one, at a load of the engine. A part of the equipment tests is often formed by a starting capacity test carried out in a freezing chamber, as well as operation tests.